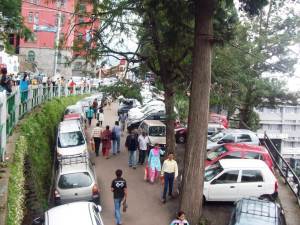 During a recent visit to Shimla, I was unpleasantly shocked to see a large  number of vehicles parked on the road near CTO. I was shocked to learn that all these vehicles had access to the restricted roads and very proudly displayed the passes stuck on the vehicle! I couldn’t understand whether the Shimlites had lost their stamina to walk or whether the long repressed inclination of  Shimlites to display their financial status had overruled their good sense to walk on the roads of Shimla!

Whatever may have been the reason, but I was much shocked to see such a great number of vehicles that the once-upon-a-time pristine and peaceful zone! The area near the CTO seemed more like a vehicle stand and less like a restricted area for vehicles that it used to be. The benches on the other side of the road were full of people, more of the younger lot  than the oldies, waiting for the HRTC taxi service started specially for the senior citizens. I thought that the present youth of Shimla lag behind in stamina that young and old of my times used to have. We just used to walk and walk and enjoy every little moment of our walking.

In order to observe the change in the pedestrian’s behaviour, I needed to sit and analyze the waiting-for-the-cab  group closely. I also wanted to observe the vehicles that came to the CTO and dropped their precious passengers. So I, too, took a seat on a bench and mind you, I have never had been so enlightened on the use or misuse of restricted road pass during the twenty long years having spent in Simla as I was during those twenty minutes!

I watched with horror the unending flow of Government vehicles, some with red, some without, beacons halting before my eyes. If I waited for some Government officer, on official duty,  to alight from the vehicle, I was sadly very mistaken as these vehicles carried the “Memsaabs” for their evening stroll on the Mall. And as parking at this point is restricted, the vehicles would go away after deporting the passenger and would come back when “M’lady” had had her evening stroll on the Mall or may a cup of her evening coffee at her favorite place! 🙂 Mind you none of the privileged passengers alighting from the Government vehicles seemed sick or unwell, they were in best of their health and appearance, rather dressed too well!

Surprisingly it was not only the Himachal Government vehicles but the Army vehicles were also not left behind in this race and I could see some proud and patriotic army vehicles carrying the “Memsaabs” and “Baba logs” to this sacred point beyond which only the VVVIPs have access! I wondered if in the last thirty years Shimla has changed so much and private and public vehicles have attained access, to this level, to restricted roads, the days are not far off when these vehicles of the rich and the influential would be parked on the Ridge itself! God save the Ridge, I prayed silently!

The Simla of yore, the my own Simla, had a sanctity towards pedestrian and was a walker’s paradise. The only vehicles that we saw plying on the roads of Simla were the ambulance, the fire brigade vehicle and the Post office van. It was only the Governor’s official vehicle that could be seen plying on these restricted roads and that too not very often. But now we have changed. Simla of my days has changed to Shimla and from a walker’s paradise it has become a motorist’s pride!

And the fact that it is our money, the hard earned money of taxpayers, that is used to maintain these roads and to spoil the environment as well, I felt so sorry. I know my lone feeble voice would be lost in the corridors of power and would remain unheard in the buzz of the vehicles but still I would go on raising my little voice till it is not muffled, albeit, by an official order!