Cleaning home, hearth and hearts on Diwali….growing up in Simla of the Sixties

Every home would be scrubbed clean…..every nook and corner would be rubbed of any dust…real or imagined. Amma would give a new facelift to the dear faithful Angithee….a new makeover of the “chikniest” chikni mitti!!

We, the kids, would get the photos hanging with the thin ropes from the the walls and scrub the dust off by cleaning it with a small piece of cloth dipped in water…but squeezed tightly before putting it on the glass frame! Ram, Sita, Lakshman and the Hanuman ji at their feet would get a new lease of shine and life by our tiny hands. I would watch critically all the faces of the gods who would be in my hands and imagine how coming of a god home made everyone so happy…..
The little white table cloth with  Dasooti embroidery would get a new lease of life.  The red and green pattern would sparkle on the bluish tinge of white cloth….Amma would add a liberal sprinkle of neel to whiten it during wash! After all it was Diwali cleanliness! The new bedcover on the wooden Takhtposh..besides the cleanest glass panes of the almirah would show clearly the proud set of mugs and a little china clay saucers stacked one over the another….waiting to be brought out when Amma would wish to impress some special guests.
The little house would come to life! Neat, clean and sparkling. The floor would be mopped clean by adding a few droplets of kerosine to the water in chilamchi and the shine would be really great.
Amma would have soaked some Serra in a bowl and we woukd wait eagerly for the yearly ritual of making patterns on the floor with tiny foot symbolising the entry of goddess Lakshmi to the innermost corner where Amma would put a new photo of Lakshmi on a wooden patda! 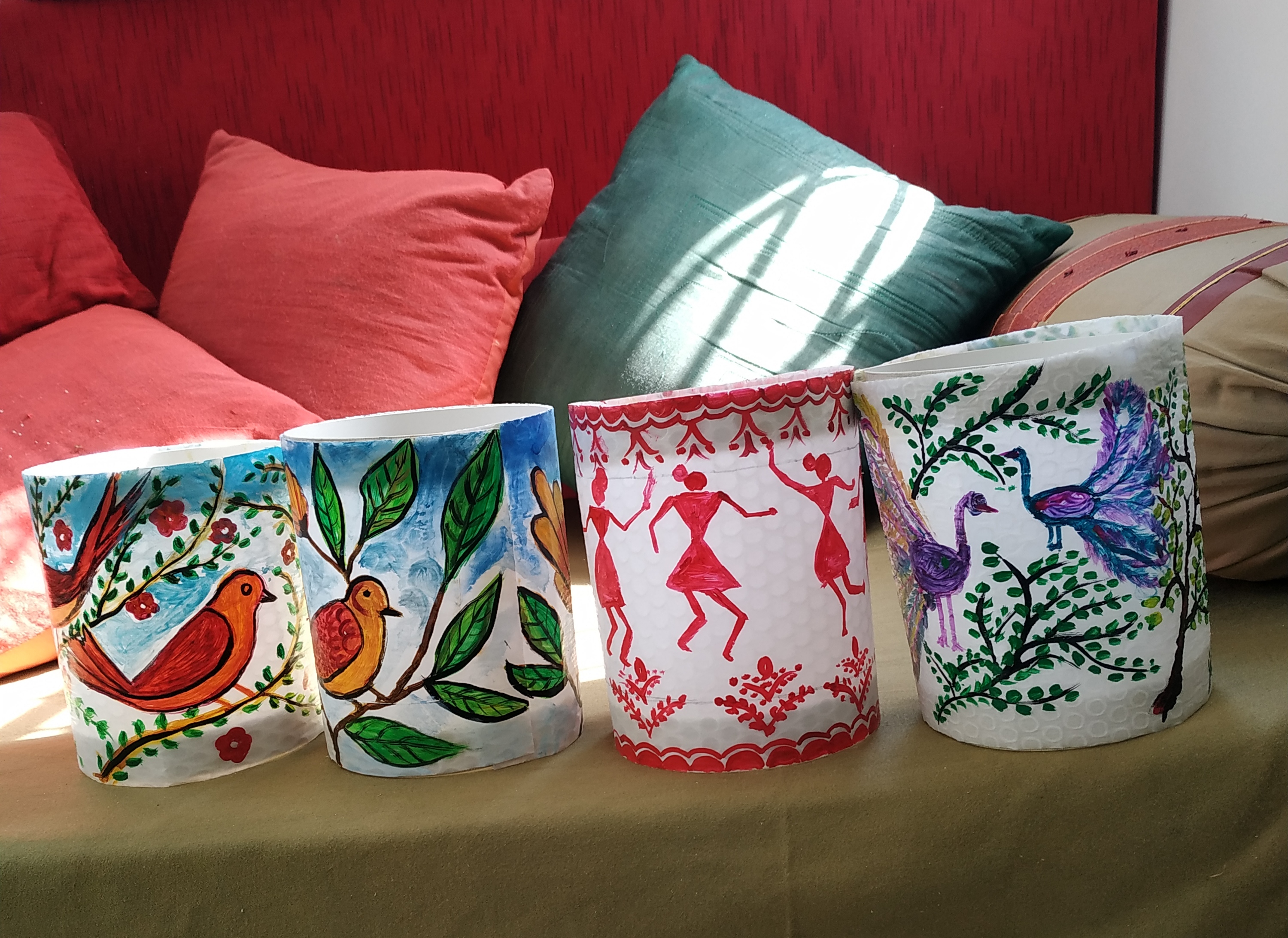 I would be in such an excited mode….running from one house to another…watching the designs in white being made by women of the house! Leela Bhenjji would make the best designs….minute and intricate and would cover an entire puja room whereas ours were small and simple.
In small houses…even Lakshmi ji had to tread carefully while making an entry as the same door was used for the mortals and the immortal goddess. She had to be satisfied with whatever pathway was designed for her in her special day. We would jump across so as not to spoil the design laid on the sparkling floors. As the cement floor would be of darker hue, the white designs would come to life when dried! It would look beautiful!
In this special day the small gods in the alcove on the wall would also come down to accompany goddess Lakshmi. And how we would make them sparkle by rubbing them with dry ash from he Angithee. No Brasso or Pitambari powder….just the simple warm fine coal ash would do the trick in our small hands! I would rub them till the peetal god’s would sparkle and shine like gold! Ah….Amma would put a few of her gold ornaments along with a Chandi ruppaiya bought on Dhanderas in the puja thali. “This is the day to worship Lakshmi….She visits every home today!” Such strong conviction she had of Lakshmi visiting our little home and why would Lakshmi not visit our home, I would think when we had cleaned it to the maximum possible!
A small puja if goddess Lakshmi where we all would sit around squeezing some space to accommodate all at one place at the same time. I would look at the kheel, batasha and the khillone along with a few pieces of Nathu Halwai sweets in the puja thali and wonder what Lakshmi would enjoy the most when She comes to visit our home!
Amma would put lots of oil in the diya as it had to burn the entire night. ..who knows when would Lakshmi come to our home! The Diya must show her the way…the designed path on the floor, specifically drawn for Her!
We would sleep with yellowish light bathing the entire house in a pale light. Though Amma would put a thali tilted at a specific angle on the diya to collect the black soot yet the light would find a way out from under it. Rather the reflection of diya light on the kanse ki thali would add a mystic touch to the yellowish light emitted from the humble diya!  I would try to remain awake for a ling time to have a glimpse of Lakshmi  when She comes but overactive day would make my eyes sleepy and I would not be awake when Lakshmi would have paid a visit to our home. In the morning Amma would distribute the sweets to us as the prasaad as she believed that Lakshmi ji must have tasted a little of the offerings made to her. Then she would collect the carbon soot and by adding a little of ghee to it would store it in a kajal dibbi. She would lovingly put a little of Kajal in our eyes and say, “This is to ward off effects of any evil eye!” And I would jump around whole if the neighbourhood in koheled eyes as I felt it had a magic potion…blessed by Lakshmi herself!
I believe it was the clean and pure hearts, beliefs and intentions that made us belive in the arrival of Lakshmi to our small house in the Lower Bazaar of Simla of the Sixties that made the trick.
Now the floor us pure white marble from Makrana in our house….would the white design visible on it? I try cleaning the house but have less of energy and conviction. I watch the neighbourhood where helping hands ar cleaning the houses….and I wonder when would these helping hands get time to clean thrir own houses. Then my mind is engulfed with another question… would Lakshmi  come to the houses in my neighbourhood or to the houses of those whose hands are cleaning these houses….

A real dilemma for  Lakshmi for sure! But after all She is a goddess and knows it all….
I pray to her and tell her that whatever way I have indulged in cleaning….it is from the depth of my heart and to the best if my capacity without relying on any outside help. The nooks and corners may have dust to be cleaned but it is my heart that I try to clean of any dust or dirt!!!
She knows it all and may She bless us all today and everyday!!
Happy Diwali to all my FB friends….my FB family!!!