Agni Dev in Amma’s Angithee  in Simla of the Sixties

In the early sixties, cooking was not just a routine but an auspicious activity right from the acquisition of Angithi, preparing it for cooking, the process of cooking itself and cleaning of the Angithee was a meticulously planned, piously performed religious ritual. Amma had her Angithee as an abode of Agni Dev therefore a routine job like cooking food was not less than a religious ritual. And rightfully so as the gods would be in the alcove in the wall waiting to be cleaned annually on Diwali. So It was her Angithee that became her virtual god in her everyday life.  Amma would  cook food on an Angithee which would have coal in it. Old iron buckets would be used to make this Anghithee.

Shaunkia ji, the ironsmith would cut a hole on one side of the lower side of some old iron bucket and would  fit an iron grill at the center of this bucket. That would be a mere skeleton of the Angithee. Amma would send me to the cotton works shop in the middle bazaar and I would bring a handful of  cotton discarded while cleaning cotton to fill the quilts. Amma would mix this  waste cotton  with fine clay bought from some native woman bringing it to our neighborhood in her kilta.  Amma would add shredded grass to this fine clay and mix all three with water. It would be fun to watch her do the mixing. I would sit close by waiting for her to do the kneading of the mixture  to make a chullah for my doll taking a fistful of kneaded earth in my hands. This mixture would be left overnight with some water.

Amma would say that the clay, on its own, lacks strength to take some shape, it has to be mixed with fine strands of grass to provide the necessary strength, else it would develop cracks!! What a wisdom it was….smoothness and strength of the clay mixture to withstand hot burning coals came from the cotton and shredded grass which could burn to ashes if not mixed with clay. Once mixed with clay….these would  sustain each other!! Was it not an analogy for life as well but I was too novice and small to understand it though Amma would share these, seemingly insignificant, nuggets whenever she could! Perhaps she thought of life in very different and novel ways!

Amma would line the bucket with a thick layer of clay dough. Her hands smeared till her thin wrists, her specked red bangles,  in fine clay would seem like the hands of Durga which I so loved during Durga Puja in the Kalibari. I would roll a few round shapes in my palm, flatten them and add three small rounded one, underside  the flattened one to make Chakla for my doll. the shapes in my palm. Meanwhile Amma would make three rounded shapes on the open end of the angithee-in-making. She would be extra gentle while making these three rounded shapes…as these would be holding all the pans, pateelas, karais and the tawa of Amma’s kitchen.  The design of the top would, with  three round projections, would be very precise as not only it had to hold the cooking vessels but also had to  let the air and fire flames pass from below! She would put the leftover clay in a separate tin dabba with a small mopping cloth in it as it would be used everyday after she was done with cooking.

The last kitchen chore that my Amma would do was to give this Angeethi a fresh coating of clay. Even this was a ritual worth explaining. The used coals, still hot and burning, would be put out from the Angithee and the Angithee would be prepared for the morning use. Amma would give a fresh coat of clay to the Angithee. The liquid clay would at once dry as the angithee would be so hot even when there were no burning coals in it. The vapours would fill our small kitchenette with a smell which no perfume today can compensate for. 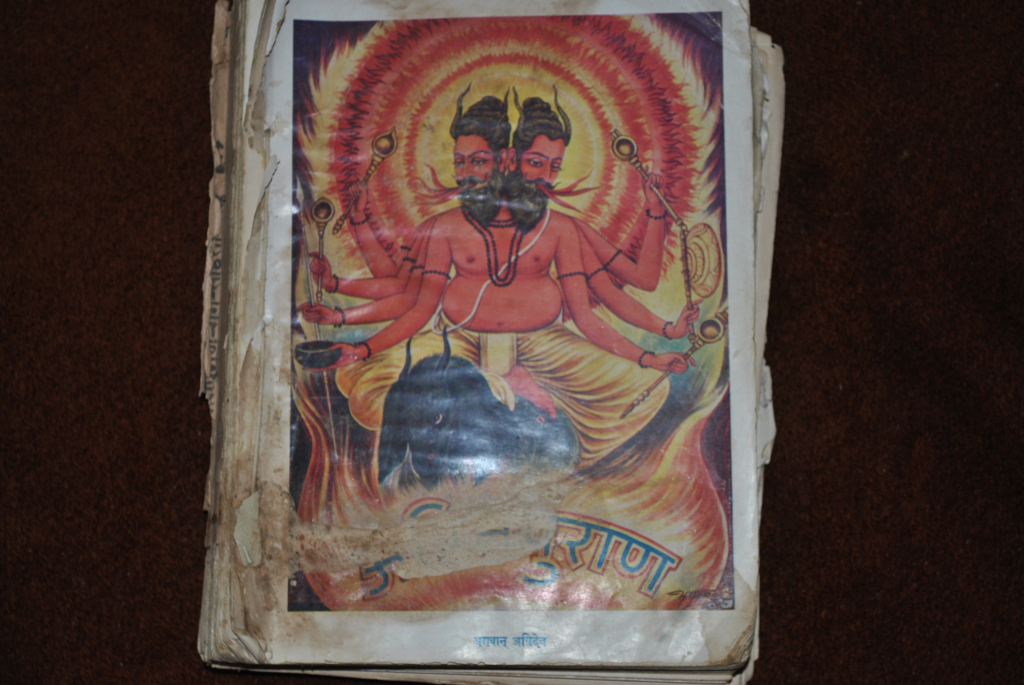 And why did Amma do all these rituals! For my Amma, and most of the women of her generation, Angithee was the abode of Agni Dev. Amma would purify her Angithee every time after cooking food. When she would cook food, the first offering of the food would be made to Agni Dev! Such was her belief that Agni has to be fed the first thing before serving food to anyone else. The food had to be pure! Nothing could or should defile food while being cooked.

During my recent visit to my Amma’s home, I saw an old Angithee lying in the storehouse. No one ever uses it. It lies discarded lamenting, perhaps, her golden times.  I thought of all the ritualistic performance that this Angithee had seen and paid my obeisance to it for having been instrumental in feeding us.

I wanted to peep through relics and memories of my childhood—some old paraphernalia, books, papers and yellowed black & white photographs! I thought of annual issues of Purana, published by Gitapress Gorakhpur, Uttar Pradesh. I craved to find them.

“ Where are the old Puranas?” I shouted while searching for the old heap of books and paraphernalia that seemed so out of place in the marbled new construction that is my Amma’s proud home now. And it was difficult to  locate those old books that during my childhood had made a small abode in Shimla, our home! I was searching for a part of my childhood that still was alive in the yellowed papers of the old books.

All those Puranas lay peacefully in a steel trunk lying in a corner of a room that had all the old unusable paraphernalia spread in it. I opened the trunk and scrambled through so many old papers, each of which had something or the other to remind me of. And then I came across Agni Purana. Now this was a Purana that I remembered only glancing at during my childhood as it didn’t have any stories in it! I loved reading anything and everything that had a story  but AgniPurana had descriptions of many of the tricky religious practices. So this is the Agni Dev that my Amma fed everyday during her daily ritual.

But now when I had reached an age where such religious practices and methods interested me a lot, I picked up this Purana and went through some of its pages to have a look at it. The Purana had Agni Dev as the recite of various Akhyanas of the Purana and I found tits and bits of the Purana very interesting. The Purana was in a very bad shape. Its pages had yellowed, the paper cover had come off but luckily the inside was intact and in good shape. I wanted to carry it back with me to Hamirpur to read it and to find why my Amma religiously fed the god of the Angithee, the Agni Dev. This is with me now, kindling the fire of love in the deep recesses of my heart,   the memories of my Amma’s Angithee!