It was 6:20 a.m. in the morning when we reached Phancha. The road from Ganvi to Phancha was kutchha and muddy, narrow and ascending, beautiful as well as horrifying! So when we got down at Phancha we were happy that now on it would be our legs alone that would support us for rest of the journey.

I looked around and was surprised to find an English style bunglow by the roadside. I had walked past it.  But the presence of a colonial style bunglow in such a remote place had made me inquisitive. I asked  someone nearby about it and was surprised to learn that it was Forest rest house built during the Raj period. !914 was the year attributed to its construction by the person proudly informing me about it.

I wanted to capture a picture of this beautiful Rest-house but walking back seemed too much of an effort to me. I thought of taking the picture during my return journey but then decided to go back a few steps and take the picture. I am glad that I did so as we didn’t return to Phancha during our return journey.

We made some inquiries about the path to Shrikhand and a local woman  told us to walk some distance and then start upward journey. I asked her, “Have you gone to Shrikhand?” Her answer was, “Yes.” But after that she put her finger on the badge that she carried on her chest and said, “We go to Mount Abu every year as we have faith in “Om Shant”!” I was bewildered and thought strange are the ways of the world. We were traversing such travails to reach Shrikhand and these people go in search of the same peace to Mount Abu! I learnt at the start of my pilgrimage that peace is ever elusive and we have to run here and there searching for the same!

We had thought of finding some more pilgrims to meet us at Phancha but found none. There were just three of us and we didn’t know anything about the way to Shrikhand!

We started ascending upwards. The path was beautiful. It was a village path where small terraced fields and grasslands surrounded us. The Sun had cast its golden rays on the grass and the scene around us looked heavenly. I clicked some pictures and we moved on. Wherever we would come across two paths facing us, we would look around for some one to guide us but would find none! Looking downwards, I could see the village Phancha and it looked beautiful. We had come quite up as Phancha looked small from here!

We moved on and came to a small muddy house where some human life was visible. It was so relieving to find some people around. We asked for water and talked to them. It was at this point that we found two shepherds, who were to be our guarding angles later on,  sitting and enjoying a smoke-pipe. I was smitten with the charm of a mother-daughter duo who watched us curiously. 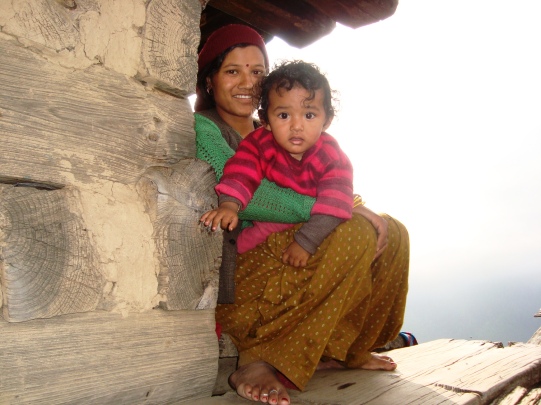 Both were graceful and innocence personified! We chatted a little with them and moved on towards Phanchakanda.

Phanchkanda is barely an hours walk from Phancha but we had taken more than an hour to reach this place. By this time we had been walking quite leisurely enjoying every little thing around us. At Phanchakanda we found a small kuchha house with a tin shed attached to it.

The tin shed served the purpose of a makeshift kitchen. An elderly man was in-charge of the kitchen and he offered us to have tea. It was an offer not to be declined and we sat around waiting for the tea. The tea was sugary, syrupy and very refreshing. 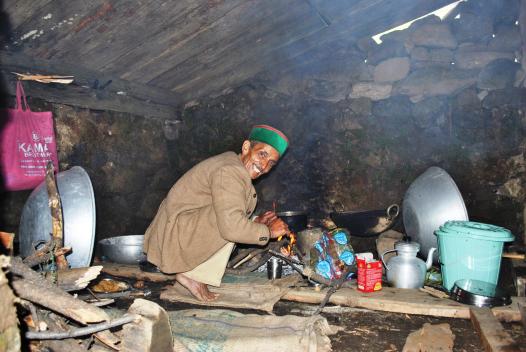 The room in that house had rubber sheets and blankets lying in a heap and was a welcome resting place for pilgrims who reach Phanchakanda in the evening and take rest there. The house and its structure spoke of the easy access to big logs of wood as the house was made of very huge logs kept to support the walls and as flooring material as well. The forest that we had to ascend had been the source of such plentiful wood in construction work.

While we were waiting for tea, the two local men we had met earlier reached there and they, too, were offered tea. 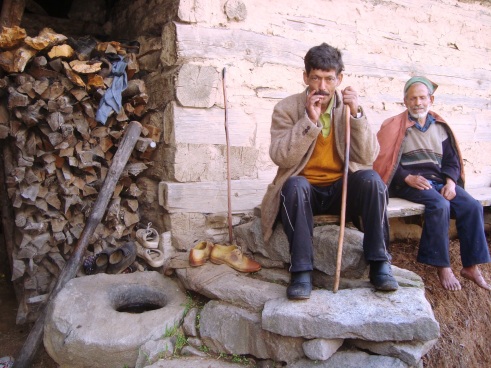 When we came to know that both of them were going to the place where we had planned to stay during the night, it was such a relief to us. Bhagat Ram Ji told us that a group of boys had also gone ahead on their way to Shrikhand. We were so happy that we were not alone on this track but there were a few others.

After taking tea we moved further and now we had local friends with us to lead us towards Shrikhand!

One thought on “Shrikhand Mahadev Kailash Yatra: Phancha to Phanchakanda…”