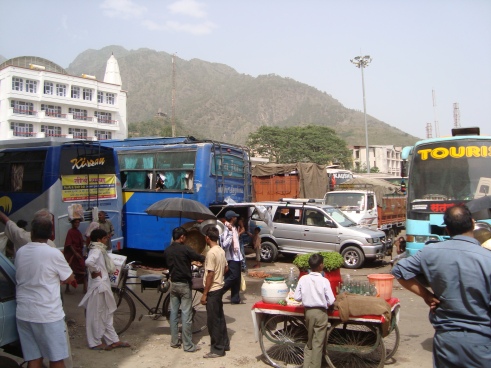 Whichever part of country you may come from, you have to reach Katra to start for Vaishno Devi temple. We had started from Hamirpur so we passed through Kangra, Nurpur, Pathankot and finally when we crossed the Chakki bridge, the driver of our vehicle informed us that now we were in Jammu and Kashmir! The place was Lakhanpur. It was the toll tax  barrier for all vehicles entering Jammu and Kashmir. I looked around, nothing had changed much. The topography was quite same as it was few miles before but the place had a different label. There were so many vendors selling Dahi-Bhalle.  The driver stopped the vehicle at a side. “Enjoy some Dahi Bhalle, it will take some time fro me to get my papers checked.” He said  and went to show his papers to two gentlemen who were sitting very comfortably at the other side of the road. There were many other vehicles stranded on our side of the road and the drivers of those vehicles were on the other side showing files containing relevant papers of the vehicle.

I saw a driver getting a slip of paper, and then I saw the driver of our vehicle handing over some money to one of the gentlemen but no paper was returned back to him. Raju, the driver, came back, sat in the driver’s seat and instantly pulled off the cassette player from the vehicle. On making inquiry we were told that since all his papers were alright, and he was in uniform with his name prominently displayed on a badge, the gentlemen police could find no fault to challan him. Whar Raju told was interesting. “Do you have cassette recorder?” asked one of the law enforcer. “Yes.” said Raju as he knew that the next step would be to physically verify its presence. and added, “But we are not playing it.” “1000/” said the other gentleman. Raju being a street-smart person and the one who makes several trips to Katra carrying pilgrims,  silently handed a 100/ Rs note in the hand of the gentleman and returned back. “But the other driver was giver a slip.” I asked incredulously. “The fool that he is, he preferred to be challaned for not wearing the uniform instead of paying some easy money.” Raju lamented. A smart answer from a person who is a regularly plies taxis on this road! I made a rough calculation. Taking into consideration that over one lac vehicles pass through this barrier in a month, the everyday number would be more than 3000 and if half of them pay Rs 100/ as easy money the amount thus collected would be staggering! Mind bowling indeed.

Jai Mata di, I sure was learning some lessons for being a successful person. Raju had taken the task of being a guide to us, “Check your mobiles.” he asked all of us. “There won’t be any signal.” We fumbled in our bags and pockets for our mobiles and found NO SIGNAL! Only one of us had signal as his mobile had postpaid plan. Not knowing what other lessons awaited us in Jammu and Kashmir we started the journey towards Katra.

It seemed as if all vehicles on the road were plying towards Katra. There was so much of rush. Katra, a  town, was bursting at its seams because of the incoming traffic. Raju took us to the parking near the Bus stand. We got down. The temperature was quite high, it was hot, very hot!

It was 2-50 p.m. and we decided to start the trek. As it would have been very difficult to contact Raju the next day when we were supposed to come back to Katra from Vaishno Devi temple, we fixed the time and the place where Raju was to wait for us–the same taxi stand next day, the Sunday at 8 a,m.!

The lessons for the pilgrims:

1 The driver of your vehicle must be properly uniformed, have all papers of the vehicle. All taxes must have been paid. For every vehicle that enters Jammu and Kashmir daily tax at the rate of 270/ per day has to be deposited. No cassette recorder in your vehicle is allowed. If you have one, remove it before entering Jammu.

3 Temperature during May and June goes up to 40* Celsius in Katra so you be prepared for the hot afternoons!