This Holi, unlike some recent Holis, we joined a little in the Holi celebrations. My little one had travelled some fourteen hours to be with us and reached home in the wee hours of Holi Day and it would have been unfair to her had we not dashed in colour on Holi. But at the end of the day it was really cool to have dashed one another, and some others as well in colours of love!

Te pictures that we clicked show the radiance of peace and warmth that colours of Holi brought to our life.

I thought of last Holi when the loud and lewd music blared right under our nose and men and women gyrating to the tunes of music! No, not that I had anything against these men and women enjoying themseves on Holi day but I did feel the inhumanity of some rather most of them. For them it was far more important to please the one that needed to be pleased! And the fact that it was the only Holi on campus, that I can ever remember, when a DJ was blaring music, and dancing or rather moving ones’ body in the name of dance to the tunes of the music went on! 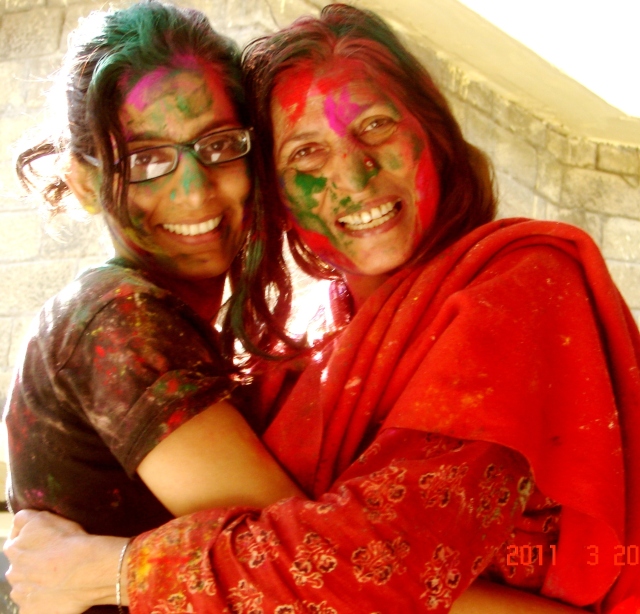 But this year there was no such luck for all those who had, perhaps, practiced hard throughout the year to showcase their talent, to one another. And ther was no luck for other who had waited for this day to watch, otherwise sober, people dancing uninhibitedly.

The celebration this year was a low affair. Please don’t get me wrong if I say that for reasons better known to people, who engage in such matters, Holi has attained importance for wrong reasons. One gets publicly sanctioned chance to move closer to the powers-that-be and attain proximity. How close one can get to the power-that-be seems like a tug of war among the contestants! It amuses me to watch these die-hard contestants focussing their time, energy and colours in gaining attention of the power-that-be! And if you ask me why do they do so, the answer is simple and plain–to gain fruits of labor, thus utilized, for rest of the year!

So for reasons above cited, I prefer to keep to  select few or to move around with great caution so that I don’t douse a wrong person in colour and my well-meaning intentions to play Holi may not be construed in a wrong manner when many around us, even on a Holi day, would come armed with unholy motives!

The best part of the Holi was watching the young students who break free of all, even if it is their upper body clothing, on Holi day! I wonder why do they have to flaunt their muscles (?)! Or do they as well work out throughout the year to showcase their well toned body to impress they intend to impress. Well, I need to ask them for details of such celebrations but watching them was a treat to my eyes!

The sumptuous Dham after the Holi was the bestest best of the Holi 2011.

One thought on “Colours of Holi Brightening our Life…”